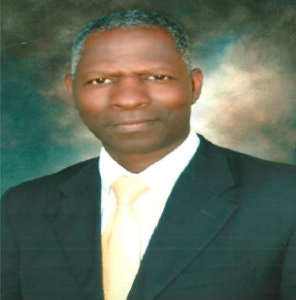 Ezekiel Gomos, B.A, M.A, Dip in Investment Appraisal. An experienced public administrator, business consultant and private sector manager, Mr. Gomos started his public service career as Lands Officer and Secretary Land Use Allocation Committee in the Plateau State Ministry of Lands of Surveys in 1980 upon completion of his NYSC

After two years, he left for Nigerian Agricultural and Rural Development Bank (now Bank of Agriculture) were he worked for some time before joining the West African Examination Council WAEC Lagos as an Assistant Registrar (Test Development).

He later returned to the Plateau State Government in 1986 as Commercial Controller of the State Supplies and Distribution Agency.

In 1988, he joined the New Nigeria Development Company (NNDC), Kaduna, the investment arm of the Northern State Governments where he rose to the rank of Asst. General Manager incharge of Investments in 1992.

In 1992, he was seconded by the NNDC to the Plateaus State Government when he established the Plateau Investment Property Development Company, (PIPDC) as its pioneer Managing Director/CEO Jos, until 1997 when he returned to the NNDC and became Deputy General Manager-Corporate and Strategic Planning.

In June 1999, the newly elected Government of Plateau State appointed Mr. Gomos as the Secretary to the State Government (SSG) where he served until June 2003 and returned to the NNDC as a General Manager (Investments) and NNDC’s Arewa Hotels Group as the Managing Director/CEO.

Mr. Gomos is an alumnus of ABU Zaria, from where he graduated in 1979 with a second class upper honours degree in Geography and the University of East Anglia, UK from where he obtained an MA in Development Economics in 1984.

In 1990, he was at the ILO Training Centre in Turin, Italy where he obtained a Diploma in Investment Project Appraisal, and also attended the Durham University Business School UK in

1994 where he studied SME Promotion and Development

In July 1991, Mr Gomos was selected to represent Nigeria as a Hubert Humphrey Fellow in the US where he studied the role of Leadership in development at the University of Minnesota and was attached to several Municipal Councils, the US Securities and Exchange Commission (SEC) and the IFC-World Bank, USA for internship and practical work experience.

While at the Plateau Investment and Property Development Company, he initiated and set up the first stock broking firm in the North Central Nigeria- PIPC Securities Ltd Mr. Gomos attended the Leadership and Policy Development programme at the Harvard Kennedy School, Harvard University USA in 2002

In addition to being the CEO of Jos Business School, he facilitates at top level training programs in Nigeria and is a Guest lecturer at the prestigious National Institute for Policy and Strategic Studies, (NIPSS) Kuru.

He is presently on the Board of Enterprise Bank PLC

He has consulted for several national and international organizations like UNDP, UNIDO, CIPE – USA, ENABLE/DFID, GIZ and so on.

In 2008, he was honoured with the prestigious award of Officer of the Order of the Federal Republic (OFR) by the late President Umar Musa Yar’adua

Our Vision
To be the “Preferred Partner in Healthcare”